The Montreal Canadiens made me who I am today

A love letter to les Habs

The Montreal Canadiens have been with me every step of the way and, as weird as it may sound, it’s the Canadiens that helped me learn a lot of things. My very ability to write these words is tied to the Canadiens. That may seem like a grandiose statement, but allow me to explain.

As a kid, I’d sit at the kitchen table with breakfast reading the boxscores in the paper the morning after Montreal Canadiens games. Well, reading may be misrepresenting the facts a little since, at the time, I couldn’t actually read. But that’s how I learned to read. I read the details of each goal the Habs scored or conceded, each penalty they drew or took and, ultimately, the stats of every team in the league. I learned words like goal, assist, penalty, period, game, attendance and referee.

Eventually, I graduated to the write-ups about the games. I sat at the table, appreciating how the write-ups painted a picture of the game in a way that the box score couldn’t. Still, though, I appreciated how meticulous boxscores were — clearly, I was pretty weird as a kid. Not too long after, my parents gave me an encyclopedia filled with stats and records. I spent hours — days, even — reading each and every factoid. The Canadiens taught me to read, but they also helped me discover a passion for knowledge — I loved knowing everything about the game writ large, even if I didn’t really have a use for that knowledge.

I’d watch every game I could. On Saturday nights I’d stay up until the end of the game, on weeknights, I’d watch until some point in the third period before being sent off to bed by one of my parents — sometimes it took both to remind me that I needed sleep more than I needed the Habs. I remember being so mad when I awoke on January 3rd, 2001, and found out that José Théodore had scored a goal the night before. He was the first goalie to score a goal and record a shutout in the same game. He scored with nine seconds left in the game on a backhanded shot from behind his own net. I was sound asleep and I had missed it.

In 2002, when I was 10, the play-by-play announcers and colour commentators from Le hockey du samedi soir went on strike. Instead of watching Habs games in silence, like I’m assuming most families in Quebec did, I serenaded my family with my own commentary and play-by-play. I did my best to describe what was going on, waxing poetic about players that had the puck. I wanted to paint as convincing a picture for my family as the commentators on TV and journalists in the paper did. I don’t think I succeeded, but I loved it.

My childhood is filled with memories like these. I remember making a voodoo doll for other teams during the playoffs — it never worked. I remember writing a letter to Trent McCleary when he was hospitalized after taking a slapshot to the throat, wishing him a good recovery. I did the same when Donald Audette had his wrist sliced open by a skate. Neither were superstar players, but they were Habs players and that mattered to me.

On the last night of the season, when the Canadiens would invariably play the Leafs, I’d rearrange the furniture in the living room and invite my friends over. It became something of a tradition. We’d watch the games breathlessly. It must’ve been funny for my parents to see a bunch of eleven-year-olds screaming at grown men to “shoot the puck!” But that was the effect that the team had on us when we were together.

My favourite jersey of all time is the one that most reviled: the barbershop jersey that was deemed to be cursed during the Habs’ centenary season. I share my birthday with the team. December 4th. It was a gift from my sister. I’ve always liked aesthetics that others don’t — eccentricity is something I inherited from my grandfather — so I loved that jersey, even when everybody made fun of the fact that it was my favourite. It was okay to be different. 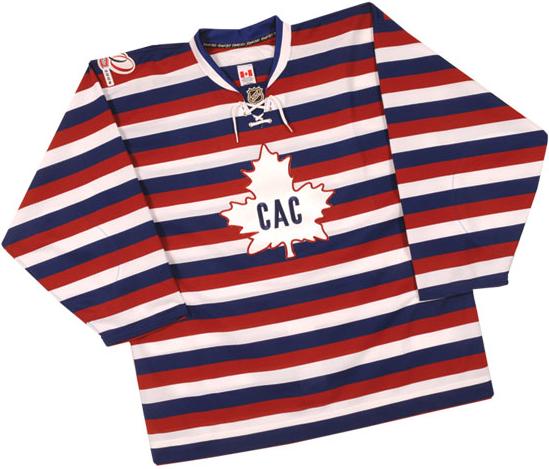 I’d like to say that I remember every game I’ve been too. There haven’t been that many, maybe one a year from the time I was 10 until I was in my early 20s. I remember my mom picking me up from school a little bit earlier than usual one night and surprising me with tickets to go an see the Habs and Oilers — I had always wanted Ryan Smyth to end up on the Canadiens, but that never materialized, so this was the closest I ever got to seeing him in red, white and blue.

I remember those damned songs that come out every time the Canadiens make the playoffs, too. Even when most would agree that there’s little chance of winning the Cup, there’s always belief. There’s a palpable energy in the city.

And that, to me, is what I remember the most about the Canadiens from all of these stories. They have become about so much more than hockey. They’ve become what brings us together, win or lose — the sainte flannelle that weaves the city into a cohesive unit. On any given game night, the group message is guaranteed to be filled with messages about the game: “Did you see that?!”; “What a hit”; “Ça sent la coupe”.

And, on a personal level, the Canadiens are very much part of who I am and what I do. Every now and then I’ll think back to sitting at the kitchen table as a kid, with the paper spread in front of me, racking my brain to understand the strings of words. Would I have learned to read without the Canadiens? Probably. I trust that my parents would’ve seen to it. But would I have developed a passion for reading? For story-telling? For merging flowery prose with the intricate details? For appreciating the power of a unique event like a goalie scoring a goal? Probably not.

Designed in Canada. Made for good living. We’re dedicated to providing you with purposefully designed products, made ethically and sustainably.

Add another $99 to your cart to get free shipping.